You are here: Home / What is the Difference Between Mixed Media and Multimedia Art? 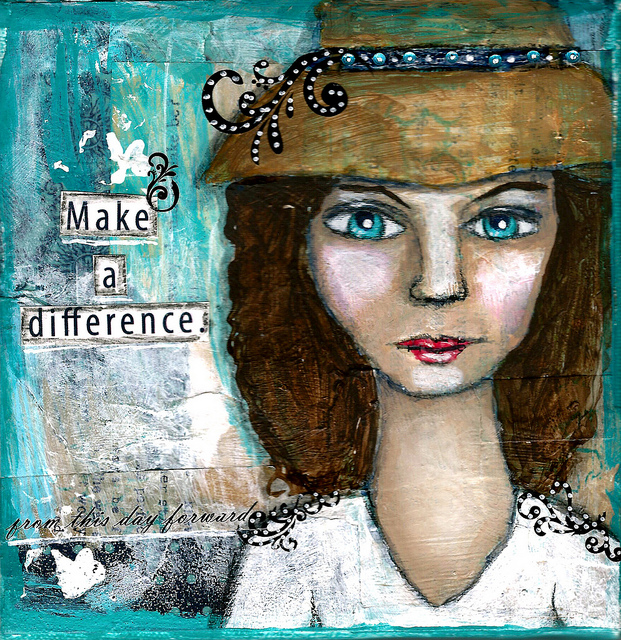 There are many different forms of mixed media art, and very few rules associated with what qualifies as “mixed media”. Because this is an art form, it is fairly open to freedom of expression, but there are some types of mixed media that are better known than others.

Greeting cards can actually be an example of mixed media. An artist may choose to use traditional drawing or painting techniques, while at the same time incorporating them with collage or scrapbooking techniques. Many greeting cards available for purchase at the local card shop include mixed media.

A collage, also known as a papier colle, refers to any form of art that is created by gluing objects to paper, board, or a piece of canvas. Creating a collage involves producing an art piece by taking various forms and creating a new whole from them.

Sculptures may or may not be mixed media. but definitely lend themselves to this art form. This isn’t referring to a classic sculpture made solely from clay, but one where the artist might use clay, paper, paint, or even pieces of garbage or wire to create an interesting visual art piece.

Artist Trading Cards (ATC) are another form of mixed media, placed on small 2.5 inch by 3.5 inch cards. These do not have to be mixed media, but several artists prefer to use a collage technique to create these tiny pieces of art.

The altered book serves as another example of mixed media. An existing book, either old or new, is taken and altered in appearance by using one or more mixed media techniques. The artist may choose to collage, tear, fold, cut, or paint the book to create a new, unique piece of art.

Because of the freedom of artistic expression associated with mixed media art, the possibilities of supplies used in the process are seemingly endless, as long as they remain within the visual arts realm. For example, if an artist were to create a collage, they may use paper, cardstock, canvas, magazine clippings, photos, and glue. For creating greeting cards, the supply list might include paint, cardstock, stickers, and stamps. For making an altered book, one might use paper, glue, hole punch, yarn, sewing needle, and a charcoal pencil. For a mixed media sculpture, you might find an artist using anything from old newspapers, to beads, to chicken wire, or even a crushed up soda can. There are not many rules as long as you stick with visual arts supplies, and the artist is otherwise only limited by their own creativity and imagination.

How to Get Started in Creating Mixed Media Art

If you have aspirations to dabble in mixed media, you’ll need the basic supplies such as those listed above. After you have a base, such as paper or canvas, gather your paint, brushes, inks, glue, buttons, beads, photos, magazine clippings, or whatever interesting items you can think of. Then, let your creativity flow. It may help to think of a specific idea or theme to help the first few pieces come together.

Mixed media art is loosely structured and allows artists of all capabilities to create something beautiful, with very few boundaries. Just remember to stay within the visual arts so as not to turn your mixed media art piece into a multimedia art piece.

Get started with mixed media projects and inspiration here.