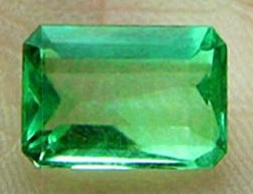 Vivid green stones, emeralds are gem varieties of the silicate mineral beryl, which also yields aquamarine, a clear blue stone, and common beryl, usually white or pale green. The distinctive, deep green of emeralds is due to traces of chromium and tends to fade under extreme heat.

Emeralds are very rarely clear, but the pattern of their flaws is considered to add to their value and is deliberately created in synthetic gems, which were first successfully manufactured in Germany and the United States.

Natural emeralds are found in calcite veins of black, bituminous limestone and in mica schist, talk schist and granite. The finest emeralds come from Colombia, but they are also mined in Brazil, Russia, Egypt, Norway, South Africa and Australia.

An emerald mine in Poona, Western Australia, was once owned by the Aga Khan. In 1971, it was reopened, and a stone weighing 138 carats, the second largest in the world, was recovered. Emeralds are second only to rubies in value and are far more expensive per carat than diamonds or sapphires.

They are slightly harder than quartz but much softer than diamonds or corundum and are usually facet cut into square or rectangular gems.

Emeralds were known to the ancient Babylonians as early as 4000 BC and were mined in Upper Egypt in about 1650 BC in what are now known as Cleopatra’s mines; they were rediscovered in 1818 about 160 km north-east of the Aswan Dam.

Enormous quantities of emeralds were stolen from the Peruvians by the Spanish conquistadors, but the exact location of the mines was never discovered. Famous emeralds include those of the Russian crown jewels and stones held by the British Museum.

Emeralds were once believed to have medicinal properties able to prevent epilepsy, cure dysentery and assist women in childbirth. They were also thought to drive away evil spirits and protect the chastity of the wearer.